Dubai's new tram project is called the Al Sufouh Dubai Tram System, and is an RTA public transport initiative. The tramway will service between 180,000 and 220,000 commuters living in or near the Dubai Marina (Marsa Dubai), JBR, and Al Sufouh (Al Sofouh, Al Safouh, Al Suffouh, etc) areas of Dubai. Initially the tramline route was to run between Mall of the Emirates and Dubai Marina Mall, prompting the nickname "The Shopping Trolley" or "Dubai Shopping Trolley". As of 2013, the tram line path has been revised to run from JBR past Dubai Marina Mall to Dubai College or Dubai Police College in Phase I, and extended to Souk Madinat Jumeirah, Burj Al Arab, and Mall of the Emirates for Phase II. The first phase of the tram system was expected to start operating in September 2009, with construction contract to be awarded in January 2008 and construction beginning in the first quarter of 2008. As with many Dubai projects, that turned out to be overly optimistic and a revised completion date is expected to be sometime in 2011 or 2012 2014 (see below), with initial work started in late 2008 or January 2009.

The tram route will connect with the Dubai Metro Red Line at Dubai Marina and JLT stations, and connect (sort of - might be a short hot walk) with the Jumeirah Palm monorail to the Atlantis resort hotel.

Al Sufouh Tram appears to have been renamed as the Dubai Tram, or Dubai Tramway.

RTA supplied route map for the Al Sufouh tram route Phase I due to start operating by Nov 2014. 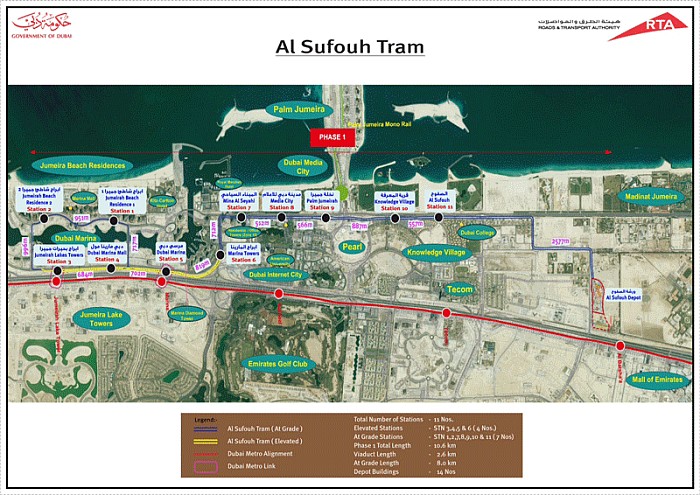 Al Sofouh Tram route map - this is a speculation only, not an official route map